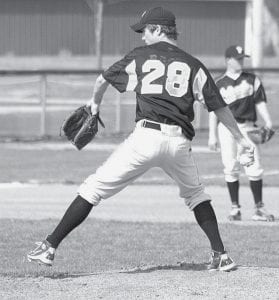 Jordan Klopfenstein winds up to deliver a pitch in Pettisville’s nonleague contest with Archbold, Thursday, April 17.- photo by Scott Schultz

The Pettisville baseball team traveled to Stryker, Monday, April 14 and recorded a 7-1 victory in their first Buckeye Border Conference game of the season.

Quinn Nofziger picked up the win, giving one run on one hit, striking out nine, and walking four in seven innings.