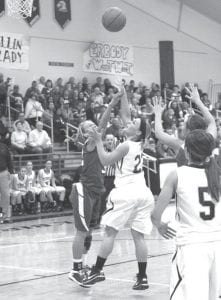 Pettisville’s Kaitlyn Nofziger, who led all scorers with 18 points, gets the shot off in spite of the defense of Stryker’s Andi Grieser.– photo by Mary Huber

Pettisville, Stryker, and Edon are in a three-way tie for first place in the Buckeye Border Conference after the Birds beat Stryker 53-41 in overtime, Friday, Jan. 14 in the Bird Cage.

All three have 4-1 records in the BBC.

“The girls are believing in themselves right now.

“We’ve got a long second half (of the season) in front of us. We just want to give ourselves a shot to be able to be in contention, and I think we did that tonight.

“It’s going to be a dogfight the second half of the year, but that’s what we look forward to. A battle like that in the league gets us ready for tournament, also.”

A tight first quarter had Stryker leading 9-6 after the first eight minutes. The Panthers extended the difference to nine, 20-11, at the half.

Waldvogel called a timeout to talk to his team.

“That was a point where we wanted to get the ball inside a little bit against them, make them (Stryker) work a little harder on defense and we weren’t doing that,” said Waldvogel.

Coming out of the huddle the Birds went on a 12-0 run to end the period down by only one, 28-27. Kylee Garcia hit a free throw, Tanner Hostetler hit a deuce, and Kaitlin Nofziger hit a foul shot.

Garcia hit a basket, followed by a free throw after Pettisville forced a turnover. Nofziger hit a deuce, a free throw, and ended the period with another basket to complete the run.

“I think our depth is where it comes through,” said Waldvogel. “We know we’ve got nine girls that can play and we just figured we would keep hammering at them.

“I think the girls worked the game plan out, and it worked for us tonight.”

The two squads traded traveling calls to start the fourth before Stryker’s Torey Varner hit a basket at the seven-minute mark. Nofziger responded for Pettisville.

After the teams again traded baskets for a 32-31 Panther lead, Andi Grieser hit a big three-pointer for Stryker. Conner Varner followed with a deuce at the 4:25 mark and the Panthers were back up by six, 37-31.

A pair of Hostetler free throws was followed by a basket by C. Varner, and Stryker led 39-33 with 3:47 left in the fourth.

It was the last two points the Panthers scored in regulation.

Brady Avina drove the lane for two. Hostetler hit the front end of a one-andone, but Nofziger grabbed the rebound on the missed shot and passed the ball to Ashlyn Bontrager, who was fouled.

Bontrager hit one of two free throws, and the Birds were down by two, 39-37.

Nofziger stole the ball and hit a basket with 1:22 left to tie the score at 39.

“We’ve got girls that hustle, and it goes back to (our) depth. When you’ve got nine girls we can press all night long,” said Waldvogel.

“We may have had just a little bit more left in our legs. Stryker’s a great team.

“I think their legs may have been just a little bit more tired.

“When you look at the overtime, too, the defensive end is where we held them to two points in the overtime. And that’s the name of our game.”

Stryker’s only two OT points occurred on a putback by Brooke Ruffer with 1:40 left.

“We’ve got to play defense and we did that in the overtime, and that was the difference,” said Waldvogel.

Playing the overtime period, the PHS coach said, “This is us. This is where we want it.

“Katie Yoder stepped up for us, especially offensively. She had a tough game up until that overtime and she stepped up, being a sophomore, and did a great job.”

Nofziger led all scorers with 18 points. Ruffer led Stryker with 15.