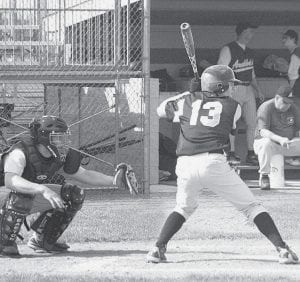 Clay Norris goes to bat for the Blackbirds.- photo by Scott Schultz

Quinn Nofziger picked up the win, going the distance and giving up just two hits, striking out eight, and walking three.

The Birds scattered nine hits, with Josh Bruner and Jordan Klopfenstein each going 1/3 with Bruner adding one run batted in. Aaron Rupp went 1/2.

The Locos tallied four runs in the bottom of the first and three more in the third.

The Birds picked up two runs in the top of the second and rallied for four more in the fifth to fall short by one run.

He gave up seven runs on nine hits, struck out three and walked four.

Leading 5-1 after four innings, the Birds crossed the plate 11 times in the fifth for the 16-1 five-inning victory.

Logan Frey was the winning pitcher. He threw all five innings and allowed one run on three hits, struck out three, and walked one.