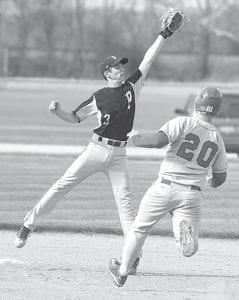 The Pettisville baseball team picked up a pair of wins and lost a pair last week.

Pettisville traveled to Edgerton, Friday, May 3 and suffered an 11-1 defeat in five innings.

The Blackbirds mustered just three hits. Cam Norris hit a single and double, and Eli King had a single.

Noah Miller suffered the loss on the mound, giving up six runs on nine hits, striking out two, and walking one.

The Birds started fast and never looked back, scoring four runs in the first inning, two in the second, and four more in the third.

Tate Kauffman recorded the win. In five innings he gave up four hits, struck out six, and walked none.

At the plate the Blackbirds had eight hits. Kauffman and Miller each went 2-2, and Norris hit a single and a double. Logan Nofziger and Eli King each hit singles.

Alex Roth recorded the win. In five innings he gave up just two hits, struck out six, and walked none.

The Birds had eight hits. Dustin Nofziger went 2-3 with a double and four runs batted in. Jacob Roth had a double. A. Roth, Miller, L. Nofziger, Evan King, and Eli King all singled.

The Eagles slipped by the Blackbirds 4-3, Monday, April 29, in BBC action at North Central.

After two scoreless innings the Birds scored once in the third, but the Eagles scored four times in the bottom half of the inning for a 4-1 lead.

The Birds scored single runs in the fourth and fifth innings, but came up one run short.

Norris suffered the loss. In five innings he gave up four runs on one hit, struck out seven, and walked five.

At the plate, A. Roth, J. Roth and Kauffman each hit RBI singles.