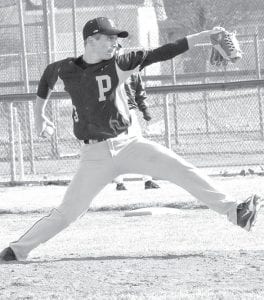 The Pettisville baseball team picked up its first win of the season in the second game of a doubleheader with Delta, Saturday, April 6.

The game report of Pettisville’s opener at Archbold is elsewhere in this issue.

Delta shut out the Birds through three innings and built a seven-run lead before the Birds scored, coasting to a 16-6 victory in the first game of the doubleheader at Pettisville.

Alex Roth suffered the loss, giving up six runs on five hits, striking out one, and walking five.

Pettisville had eight hits to Delta’s 14. Dustin Nofziger paced PHS, going 2-3 with a double and three runs batted in. Jacob Roth went 2-4; Cam Norris, Eli King and Noah Miller each had singles; A. Roth had an RBI single.

Pettisville started out on fire, scoring five runs in each of the first two innings and four in the third.

Norris picked up the win. In four innings he gave up nine runs on five hits, struck out three, and walked four.

The Birds had a host of hitters leading the way with Roth going 3-4. Norris hit a double; Evan King went 2-3 with two RBIs; J. Roth and Eli King each went 2-5; and Nofziger hit a two-RBI single.

Pettisville traveled to Fairview, Thursday, April 4, for a non-league contest and came up short, losing 6-4.

Pettisville had six hits with Nofziger leading the charge, going 2-4. Norris hit an RBI triple; J. Roth, an RBI double; A. Roth, an RBI single; and Evan King, a single.

Kauffman suffered the loss on the mound. In four innings he gave up four runs on three hits, struck out one, and walked three.

Pettisville was held scoreless through three innings with the Apaches crossing the plate three times in the bottom of the third.

The Birds narrowed the gap, scoring one run in the top of the fourth.

Fairview added a single run in the fourth and two runs in the fifth for a 6-1 lead.

The Birds rallied in the top of the seventh, crossing the plate three times, but fell short 6-4.