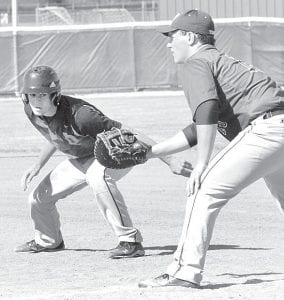 Pettisville’s Jacob Roth is safe after a pickoff attempt by Tinora in their sectional final, Tuesday, May 14.– photo by Mario Gomez

Tinora pounded out nine runs in the first inning on its way to a 14-4 five-inning victory over Pettisville to win a Division IV sectional baseball championship, Tuesday, May 14, at Napoleon.

The Rams, ranked 20th in Div. IV by the Ohio High School Baseball Coaches Association, advance to the district tournament with a 12-6 record.

The Blackbirds mustered just four hits while the Ram bats hummed with 12.

The Birds cut into the lead in the third, crossing the plate three times, but Tinora responded with five runs in the fourth.

Pettisville scored a run in the fifth for the 14-4 run-rule final.

Jacob Roth and Cam Norris each singled and Jacob Deffely added two singles for the Birds.

Norris suffered the loss, giving up three runs on one hit and walking one.

Pettisville closed out its regular season with a 3-2 loss to Montpelier, Thursday May 16, at Pettisville.

Montpelier (4-15) scored three runs in the opening inning and squeaked out the win.

PHS answered with one run in the bottom of the first and one in fifth for the 3-2 fi- nal.

Tanner Rufenacht suffered the loss on the mound. Pitching a complete game he gave up three runs on three hits, struck out eight, and walked four.

Edon dropped the bomb on Pettisville (7-3) in Buckeye Border Conference action, Monday, May 13, squeaking out a 4-3 win in eight innings to win the BBC title.

Pettisville trailed 2-0 heading into the bottom of the fourth, but crossed the place twice in the inning to knot the score.

The Bombers scored in the fifth, but PHS sent the game into extra innings by scoring in the bottom of the seventh.

Edon scored a run in the eighth for the 4-3 final.

Both squads socked seven hits. Kauffman and A. Roth each had a double for PHS.