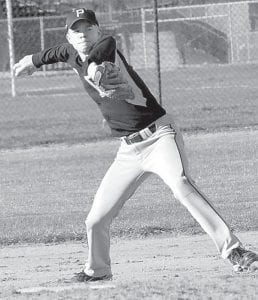 Landon Roth fields a grounder and throws to first base for an out against Wauseon, Tuesday, March 29.– photo by Mario Gomez

The Pettisville baseball team took it on the chin last week in their only game against the Swanton Bulldogs with four games cancelled due to the weather.

Swanton pounded out 12 hits while the Birds mustered just one– a single from John Rufenacht.