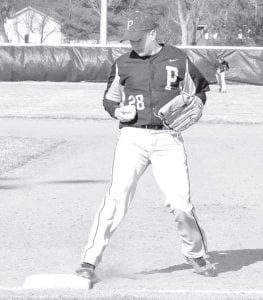 Pettisville’s Noah Miller gets an unassisted out at first base in baseball action earlier this season.– photo by Mario Gomez

The Pettisville baseball team had a tough week last week, losing to Tinora and North Central in identical 10-0 shutouts.

But the Birds picked up a 19-1 Buckeye Border Conference win over Fayette.

The game ended after five innings due to the run rule.

Noah Miller suffered the loss on the mound. In one inning he gave up four runs on two hits.

Alex Roth, Cam Norris and Tate Kauffman also took their shots at the Rams on the mound.

Pettisville hosted the high-flying Eagles of North Central, Tuesday, April 23, and suffered its first BBC loss of the season.

The Eagles (6-6, 3-1 BBC) pounded out 13 hits while the Blackbirds mustered just three.

Logan Nofziger hit a single and a double, while Norris and Kauffman each singled.

Miller suffered the loss, giving up three runs on four hits in 1/3 inning.

Roth recorded the win. In five innings he gave up one run on two hits, struck out seven, and walked five.