Peterson Tangles With A Bulldog 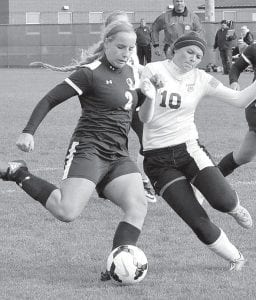 Emie Peterson (2) gets pressure from Swanton’s Ally Hendricks (10) as the Blue Streak senior attempts a goal in their Div. III district championship game, Saturday, Oct. 28. Emie’s sister Andi scored the game’s first goal while another sister, Macy, scored twice. Kamryn Hostetler and Regan Ramirez also got in on the scoring frenzy against the Bulldogs, as the Blue Streaks won 6-1. Archbold (19-0) was scheduled to play Doylestown Chippewa (16-0-2) last night, Tuesday, in a regional semifinal. The winner plays for a berth in the state tournament on Saturday, Nov. 4, against the Liberty-Benton (14-3-2)-Coldwater (9-6-2) semifinal winner.– photo by Mario Gomez