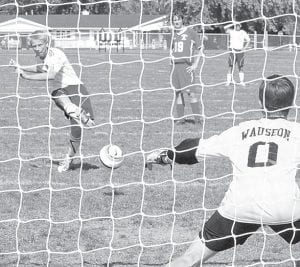 Of 559 Ohio boys soccer teams, the Division III 10thranked Streaks are one of only two teams to complete the season with no losses or ties. D-II Bellbrook also finished 16-0.

The Streak defense allowed only two shots on goal during the road trip. The three shutouts upped Archbold’s total to eight for the season.

Individually, at the completion of the regular season junior Brodie Nofziger led all Ohio D-III players with 31 goals scored. Senior David Bontrager checked in at eighth in the state in assists, with 15.

“The boys were great all year,” said Sean Stewart, AHS head coach. “They worked hard in the off-season and were determined to be successful.

“They earned a perfect season, and hopefully we can use this to go into the playoffs with confidence.”

Eight minutes into the second stanza, Nofziger was tripped in the penalty area and punched the resulting penalty kick into the right side of the net for a 1-0 lead.

With 15 minutes remaining, Nofziger passed to Bontrager, who blasted a leftfooted shot from 12 yards for the final goal.

Bontrager started the scoring in the 11th minute when he cut around several Bobcat defenders before firing from 20 yards.

Shae Hernandez added a goal five minutes before halftime with an airborne header from 3 yards after a Blue Streak corner kick bounced around the goal mouth.

Hernandez added a second goal 10 minutes after the break, shooting from 18 yards on the left with Bontrager assisting.

The Streaks built their lead to 4-0 with 21 minutes remaining when Santos Quintanilla scored from 6 yards away after a Zach Meyer pass from the left.

Less than a minute later Nofziger notched the final score from 4 yards away.

Archbold had 19 shots on goal to BG’s one.

The teams battled to a scoreless first half before the Streaks got on track.

Two minutes after the break, Bontrager scored from 22 yards after a Hernandez pass from the left.

With 28 minutes to play, Nofziger added an insurance goal, scoring from 10 yards on the right side after a Bontrager pass.

Just 14 seconds after that goal, Hernandez added the third Archbold tally, a shot from 6 yards with Matt Sevey assisting.

The JV teams battled to a scoreless tie, and Archbold finished with a 6-5-3 record.