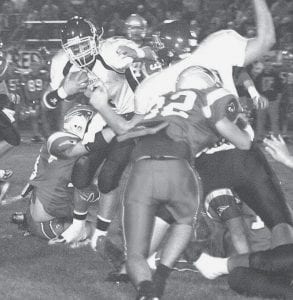 David Rupp gets wrapped up by a Patriot as he struggles to move the ball up the middle in Archbold’s NWOAL battle with Patrick Henry. PH scored 28 points in the first half on its way to a 35-7 victory.- photo by Scott Schultz

If you’re superstitious, you probably believe seven is a lucky number.

Both had undefeated records and were looking for a league title, not to mention playoff hopes being on the line.

The victory upped Patrick Henry’s record to 7-0 in the NWOAL, guaranteeing the Pats at least a share of the league title. PH, ranked third in last week’s Associated Press Division V poll, is 8-0 overall.

Archbold, which was ranked second in the Div. V poll, suffered its first setback and is 7-1, 5-1 NWOAL.

“Winning the seventh title is tremendous,” said Bill Inselmann, PHS coach. “Six other classes have graduated. I told (the team) a lot of these kids are out of high school and college and out working, they have degrees, and we are still carrying the torch. We are going to ride it as long as we can. It gives us momentum and confidence.'”

“We were like a deer in the headlights,” said John Downey, AHS head coach. “We just didn’t come out and play in the first couple of minutes.

“We settled down, but we just didn’t get in sync offensively. Give credit to PH’s defense. We had opportunities to get back in the ballgame, but we just couldn’t finish it.”

With the Archbold defense backed up against a wall right from the start, the offense took the field following a 16-yard kickoff return by Jake Fidler.

The night got a little longer when, on the second play from scrimmage, a David Rupp pass caromed off Fidler’s shoulder pad into the waiting arms of Bill Miller.

Miller returned the INT 22 yards, setting the Pats up on the Streak 19-yard line. Six plays later George hit Mitch Leonard for a 2-yard touchdown toss and a 14-0 lead.

The Blue and Gold had two more possessions in the first quarter but came up empty as the PH defense shut out its league rival.

The Pats continued their defensive dominance in the second quarter, holding the Streaks scoreless in the first half.

Patrick Henry’s defense “kept us from getting in sync all night long,” said Downey. “We just couldn’t sustain anything. It was disappointing the way we came out and played the first eight minutes or so.”

Defensively, the Streaks gave up two touchdowns in the second quarter. George connected with Leonard on a 47-yard strike and Buenger rambled 13 yards for a 28-0 lead going into the half.

Archbold opened the third quarter with renewed determination. Taking the opening kickoff, Rupp and company put together an 11-play drive that ended with Fidler crossing the goal line from 3 yards out.

Fidler picked up 3 and 2 yards to start the drive, and Rupp connected with Christian Goering for 12 yards. Drew Smith was on the receiving end of a 32- yard pass play, and Rupp added 7 more yards on the ground.

After the PH defense stopped Fidler for no gain, the AHS senior crossed the goal line from 3 yards out.

That ended Archbold’s scoring. After being held scoreless in the third quarter, the Patriots crossed the goal line one more time in the fourth on a 19- yard run by George.

Fidler led AHS with 69 yards while Buenger finished the game with 99 yards on 15 carries for PH.

“Our defense is good. This game is the biggest test our defense has had all year,” said Inselmann. “Archbold runs a spread offense, and they are the only team in our league that runs that offense right now.

“We had a hard time preparing for that offense this week. This was the most time we spent on defensive preparation all year.

“Archbold does a great job of spreading you out. This was a big test for our defense. We went into this game wanting to stop the run first.

“You have to pick your poison, and we did not want Archbold to run the football.”