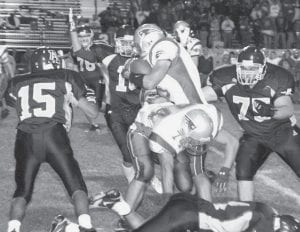 The Blue Streak defense, including Breon Price (15) and Kyle Stipp (75), swarms around a Patriot ball carrier to prevent him from gaining yardage. Patrick Henry rushed for 263 yards and had 402 total yards of offense in its 49-28 NWOAL victory.- photo by Jaycee Riley

The win gives PH (8-0) a 6-0 record in the Northwest Ohio Athletic League and guarantees the Pats at least a share of their sixth straight league title.

Kuesel ran for five of the Patriots’ seven touchdowns, including all four of PH’s second half scores. As a team, PH rushed for 263 yards and passed for 139, giving it 402 total yards on offense.

Archbold had 425 total yards on offense: 62 yards rushing and 363 passing. Three interceptions cost the Blue Streaks, though, as two led to PH touchdowns.

PH took the opening kickoff and scored on its first possession. The Patriots marched 71 yards on 13 plays as Gary Cole scored on a 2-yard run for a 7-0 lead with 6:10 remaining in the first quarter. 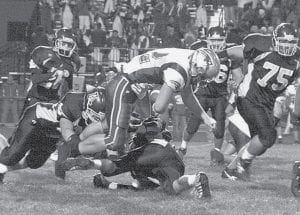 This fourth-quarter hit on Patrick Henry’s Gary Cole caused a fumble that was recovered by the Blue Streaks at the PH 40-yard line. Eight plays later, Gene Goering passed to Jimmy Dunning for a 16-yard touchdown pass.- photo by Jaycee Riley

Gene Goering, Archbold quarterback, was intercepted by PH’s Mitch Leonard on the Streaks’ first possession. Leonard returned the ball to the Blue Streak 28-yard line, but PH failed to capitalize.

On fourth-and-22 the Patriots elected to punt. Tom Busch’s punt was downed at the 1-yard line, and AHS took over possession at the 2:52 mark of the first period.

Goering ran the ball to the 3, and a 5-yard pass to Jimmy Dunning moved the Streaks to the 8-yard line. Goering passed to Jacob Fidler, who ran 92 yards for Archbold’s first TD and a 7-7 tie.

The Patriots took a 14-7 lead early in the second quarter when Busch threw a 14-yard TD pass to Zach Botjer.

After AHS failed to score on its next drive, PH took less than a minute to score its third touchdown. Taking over on its own 13-yard line with 3:22 left in the half, Kuesel scored on a 22-yard run at the 2:44 mark.

Archbold came right back, as Goering scored on a 13-yard run with 27 seconds remaining for a 21-14 deficit.

PH attempted a 33-yard field goal with five seconds remaining in the half, but the attempt was too short, and the Patriots held a seven-point lead at the half.

Second Half Spells Doom For The Streaks

Archbold was stopped on its first possession of the second half when Goering was intercepted by Leonard at the PH 37-yard line.

Leonard returned it to the Blue Streak 24-yard line, and six plays later Kuesel scored his third TD with a 5-yard run and a 28-14 PH advantage.

Goering was intercepted for the third time when Botjer grabbed a pass intended for an AHS receiver at PH’s 37-yard line. Kuesel scored on first-and- 10 from the 37, giving PH a 35- 14 third-quarter lead.

PH raised the advantage to 42-14 on a Kuesel 5-yard TD run on the first play of the fourth quarter.

Archbold needed a miracle, and seemed to get one as a Cole fumble at the PH 40 was recovered by Mick Britenriker. Eight plays later Goering passed to Dunning for a 16-yard TD pass, closing the gap to 42-21.

With only 6:24 remaining AHS had to get the ball right back. An onside kick by Jack Downey was touched by a PH special teams player and was recovered by Archbold at the Archbold 49- yard line. The Streaks failed to capitalize, however, and turned the ball over on downs.

PH didn’t go anywhere on its next possession, either, and Fidler returned Cole’s punt to the PH 46-yard line. Passes to David Rupp and Dunning advanced AHS to the PH 22, and Rupp pulled in a lofting 22-yard pass for Archbold’s second TD of the fourth quarter and 4:10 remaining.

Down 42-28, Archbold tried another onside kick, but this time PH recovered the ball. The Patriots scored their final touchdown on a 45-yard run by Kuesel for a 49-28 lead.

Archbold had one last chance to score, but was stopped as Goering tried a quarterback sneak on a fourth-and-goal from the 4 as time ran out on the Streaks.