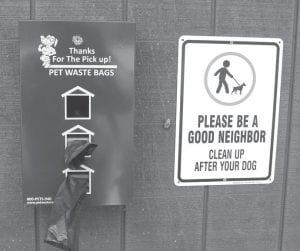 Metal boxes like this one are spread throughout the three largest parks in Archbold, with the goal to reduce or eliminate the problem of people failing to clean up after their dogs. Jennifer Kidder, Archbolds Parks & Recreation director, said she won’t mind restocking the pet waste bag dispensers if the bags are being used for their intended purpose.– photo by David Pugh

The Archbold Parks & Recreation department has installed what it hopes will be the answer to dog poop problems in Archbold parks.

Five metal boxes that dispense small plastic bags have been installed in the three largest parks to encourage pet owners to clean up after their dogs.

Dog poop was discussed during the Thursday, June 20 Park Board meeting, when board members complained that dog owners were allowing their dogs to leave their waste behind and not clean up.

The pet waste bag dispensers have been in place about a month.

Jennifer Kidder, Parks & Recreation director, said, “I think they’re getting used. They’re not getting tons of use.

“I don’t want to jinx myself. I think they’re getting used and they’re not being abused, so that’s a plus.”

Two dispensers were placed in Ruihley Park. One is located at the basketball courts, near the terrace along West Holland Street.

In June, Kevin Morton, a member of Village Council and Park Board, identified the area as a particular problem for dog droppings.

Two dispensers are in Woodland Park, and one is in Memorial Park.

“I don’t want to say we don’t see it (dog excrement) at all. I don’t think it’s quite as obvious at other parks as it is in Ruihley Park. I know there’s issues at Woodland as well,” said Kidder.

“There’s a lot of people that walk there, but I think you see most people walking in Ruihley Park and Woodland Park, and that’s where the bulk of the issues are.”

The bags themselves come on rolls, and are installed in the boxes.

Replacement bags are not “terribly expensive,” she said.

“It’s definitely an expense, but I don’t think it will be a major expense down the road.

“And I don’t have any problem replacing the bags as long as they’re getting used for the right purpose.”

Gauging the success or failure of the pet waste bag dispensers will require more time.

“We’ll see how it goes, and hopefully we will begin to see a benefit,” she said.