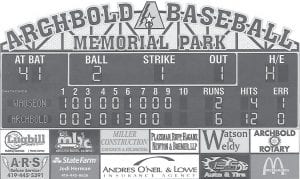 The final version of the new baseball scoreboard that will be installed in Memorial Park. The scoreboard should be in place for the start of baseball season.– courtesy graphic

The Archbold Park Board discussed, but decided not to make any changes to, the proposal for a new scoreboard at the baseball diamond in Memorial Park.

The board talked about the scoreboard at its Wednesday, Jan. 27 meeting.

Jennifer Kidder, director of Archbold Parks & Recreation, said the scoreboard was paid for by advertising sold on it.

There also was discussion of the letter “A” that separates the words, “Archbold,” and “Baseball.” The A is not the standard Archbold High School logo “A.”

Kevin Morton, councilman and park board member, said the “A” was adopted from the Arizona Diamondbacks, a Major League Baseball team.

Ultimately, no changes were made.

Kidder said the sign will be manufactured by Daktronics of Brookings, S.D. It will be installed in March, in time for the new baseball season.

In other Memorial Park news, Kidder told the board there is still some work to be completed at the remodeled softball field at Memorial Park.

The field was rebuilt mostly with private funds and an estimated 400 hours of volunteer labor.

Kidder said a plaque is being prepared that will honor those who helped with the work. It will be placed on the concessions stand building.

She said there is some fencing left to install, and netting has to be hung. The work will wait for good weather.

Taking care of the redone softball field was discussed, and games won’t be played when the field isn’t playable.

Kidder said, “I’m not saying we won’t do what we can to make a game happen, but we’re not going to bail water” off the field.

She has ordered rakes, so players can rake their areas. Concession Stand

In fact, health department inspections found fault with the Memorial Park concession stand when they found a standard, home-use crockpot merely stored in the building.

She said she attended a restaurant auction in Napoleon, where she was able to purchase a commercial refrigerator for $400.

In other building news, Kidder said the shop building in Ruihley Park was covered with new siding, and a new door has been ordered.

Youth basketball is underway, and there is a large turnout of youngsters, Kidder said.

Youth basketball is held at the Archbold Elementary School on Monday and Tuesday nights, with games starting at 5:30 pm, 6:30 pm, and 7:30 pm.

Kidder said there has been a good crowd on hand to watch the games.

Jennifer Hurst, the newest park board member, attended the meeting. All members were present.

The next meeting is Wednesday, March 9, 7 pm, in council chambers.