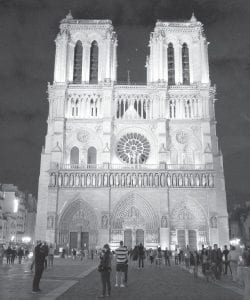 On Monday, April 15, the heart of Paris burned.

An icon of the Catholic faith, a symbol of Paris, Notre Dame survived the French Revolution, several wars including two world wars, and all manner of insult. What took 100 years for craftsmen to build became a gutted shell in less than a day.

Late Monday night, word was the stone facade of the cathedral had been saved.

Even as fire still smoldered, Emmanuel Macron, president of France, announced the cathedral will be rebuilt. He said starting yesterday, Tuesday, an international appeal would be started to raise the money to rebuild Notre Dame, which, translated, means “Our Lady.”

It won’t be the same, but it will return and will again be a centerpiece known worldwide for architectural beauty, religious symbolism, and magnificent history.

Notre Dame may be in Paris, but it is a treasure of the world, and there is no doubt the world will rise to the challenge of restoring it to beauty and glory once again.