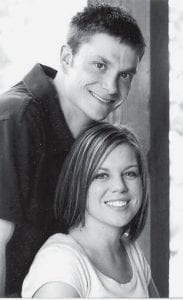 Dan and Sandy Burkholder, Delta, announce the engagement of their daughter, Shannon, to Benjamin Grime, son of Roger and Beth, Archbold.

The bride-elect is a 2000 Delta High School graduate and a 2004 Bowling Green State University graduate. She is employed as an intensive care unit nurse at Toledo Hospital.

Her fiancé is a 2001 Archbold High School graduate and a 2006 Eastern Michigan University graduate. He is a sales representative for Con-way Freight, Columbus.

The couple will exchange vows, Saturday, Aug. 23, 2008 at First Christian Church, Wauseon. They will reside in Dublin.