Parade of Lights Turns On The Christmas Spirit

To see more photos of the Parade, click on the Big Blue Button above. 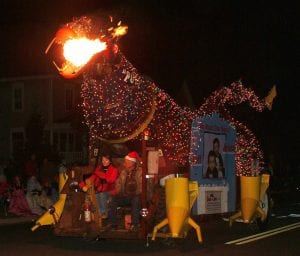 Once again the annual Archbold Parade of Lights lit up the streets, Friday night, Nov. 28.

Puff the Magic Dragon breathed real flames and a steam engine spewing smoke were two of the highlights of the parade.

Children screaming for Santa were not disappointed as St. Nick made several appearances during the parade. To see more photos of the parade, click on the Big Blue Button on the home page.–Posted 11.28, 10 p.m.