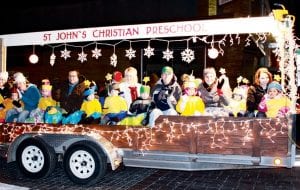 Julie Brink, director of the Archbold Area Chamber of Commerce, said there were 48 entries in the 2011 Parade of Lights, Friday night, Nov. 25.

That’s down four from last year. Previously, the lowest number was 50.

Brink had reports that there was a nice crowd both in the downtown historic district and other parts of the parade route.

“We were very, very fortunate,” she said. Street Lights

One difference from previous years was the downtown street lights remained on.

The lights were left on because of liability concerns.

“There were complaints last year that people couldn’t see the curbs,” and could trip over them, she said.

Brink said the parade started at a fast pace, but then slowed down with some gaps.

“People walking alongside the floats had trouble keeping up.” Santa Visit 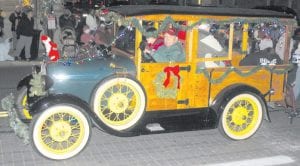 Brink said Santa’s visit to Ruihley Park Pavilion was popular. A big crowd was on hand.

There was a steady stream of traffic through the Festival of Lights in Ruihley Park.

“It was a good kickoff to the holidays,” she said. 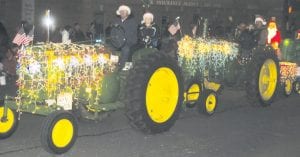 There were 48 entries in the Archbold Parade of Lights, including floats, decorated vehicles, lighted tractors, and horse-drawn carriages. There was a good crowd watching the parade, said Julie Brink, director of the Archbold Area Chamber of Commerce. See video from the Parade of Lights at ArchboldBuckeye.com.–