Parade Lights The Night In Archbold 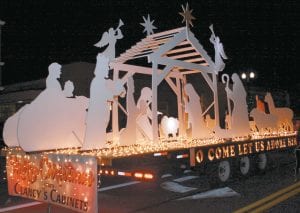 While there was a prediction of a 30% chance of rain, the weather turned out to be near perfect.

The temperature was around 46 degrees “with a very light wind,” said Amy Krueger, executive director of the Archbold Area Chamber of Commerce.

“The weather was awesome. We couldn’t ask for any better.”

There are no firm numbers on the crowd that gathered to watch the 19th annual Parade of Lights, featuring floats and vehicles decorated with Christmas lights. Krueger said there was a good crowd downtown, which included popcorn and hot chocolate, live music, and an ice carver.

That’s also up from 2015, when the parade went on despite rain that fell all evening long. That year, there were 36 entries.

There were several new entries in the parade, including Worthington Industries, Delta; Holland Farms, Lyons; Country Dog Salon, rural Archbold; and Community Health Professionals, which has a facility in Archbold. 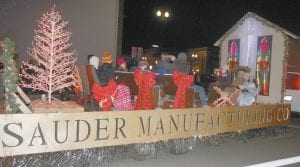 There was also royalty in the parade. The Fulton County 4-H King and Queen, Connor Hagans, Archbold, and Rachel Jordan, Swanton, were on a float, and Courtney Krieger, rural Wauseon, Fulton County Dairy Princess, was on another.

Krueger said the evening went without major problems. There were some gaps in the parade, but from her vantage point downtown, “I don’t think it was bad.

If there was an issue, it was with Santa Claus.

Santa was taking Christmas wishes and being photographed with youngsters at the Holly Jolly Christmas Shop, but, “unfortunately, he did not get to hear every child’s wish,” Krueger said. 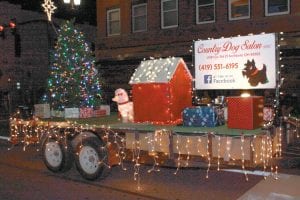 Santa had to be whisked down to the ConAgra parking lot to take his place in the bucket of the Archbold Fire Department aerial truck, which was the last entry in the parade “so even more kids could see him,” she said.