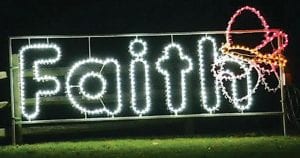 The newest addition to Archbold Festival of Lights is this display of the name Faith, with a butterfly. It is in memory of Marleah Faith Lauber, daughter of Kristopher and Kristen Lauber, Archbold. The two-month-old died June 11. The festival officially opens Friday, Nov. 23, after the Parade of Lights.– courtesy photo

For the 14th year, the Christmas season will kick off with the annual Archbold Parade of Lights, followed immediately by the opening of the Festival of Lights.

Julie Brink, director of the Archbold Area Chamber of Commerce, said the parade steps off from the ConAgra Foods parking lot on Stryker Street at 6:30 pm, Friday, Nov. 23, the day after Thanksgiving.

It follows the same route as the past couple of years.

The floats will make their way through the village’s downtown historic district to Walnut Street, where they will turn west.

They will travel past Ruihley Park, the site of the Festival of Lights, then go back south on LaChoy Drive, returning to the ConAgra parking lot.

As of Tuesday, Nov. 13, Brink said there are 22 entries in the parade. 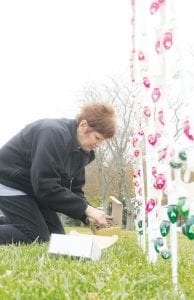 Julie Brink, director of the Archbold Area Chamber of Commerce, was one of several volunteers helping to set up the annual Festival of Lights Christmas displays in Ruihley Park, Saturday, Nov. 10. Unseasonably warm temperatures made the work easier. The high temperature recorded on Saturday by the Archbold Wastewater Treatment plant was 73 degrees.– photo by David Pugh

Among the list this year is an old favorite, an Archbold school bus covered in Christmas lights.

The Archbold Fire Department has entered three units, including its rescue boat.

The Wauseon Fire Department once again has entered a truck.

Joining the parade this year is Experimental Aircraft Association Chapter 582. Their float is based on the theme “Chitty Chitty Bang Bang,” a British story about a magical car.

The Company, the Archbold High School show choir, will be downtown singing carols to those waiting for the parade to pass.

Brink said this year, floats carrying children are asked to stop in the Westfield Medical Center parking lot to drop off the youngsters. Parents should meet their children in that parking lot, she said.

The change has been made as a safety measure, because of the number of vehicles in the ConAgra lot after the parade. 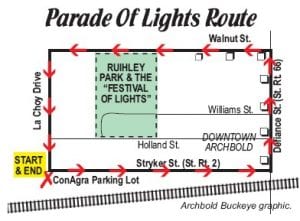 After the Parade, the Festival of Lights will open.

The Festival of Lights was first organized in 1988, making 2012 the 24th year for the lights display.

Brink said there is one new display. Located near the east entrance to Ruihley Park is a lighted display of the name “Faith,” with a butterfly.

It honors Marleah Faith Lauber, daughter of Kristopher and Kristen Lauber, Archbold, who died June 11 at two months of age.

The toy train display was moved so its electrical load could be spread among different circuits, and the jackin the-box was relocated to an area near Spengler Field.

Santa Claus once again returns to the Ruihley Park Pavilion following the parade to hear the requests of children.

Free photographs of children with Santa will be taken.