Over 30 Entries For Parade 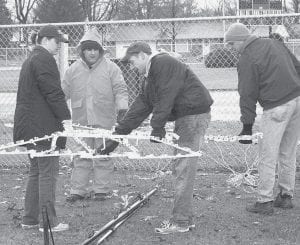 A little rain didn’t stop these four volunteers from completing their part of the Festival of Lights setup in Ruihley Park on Saturday, Nov. 15. Preparing their angel are, from left, Jessica Short, Jeff Schaub, Mark Weaver, and Mike Short, all of Archbold. Nanette Buehrer, director of the Archbold Area Chamber of Commerce, said all of the displays in the festival will be ready by Friday, Nov. 28. The Festival of Lights opens immediately following the annual lights parade in the village.- photo by Michelle Pugh

“We probably have over 30. I picked up the mail today, and there’s a couple of more in there,” she said.

She’s also had some verbal commitments from others.

She anticipates the parade will be a reasonable size.

This year’s parade starts at 6:30 pm, Friday, Nov. 28. Following tradition, it is the day after Thanksgiving.

Buehrer said she still could use four to six volunteers at the ConAgra parking lot.

Floats for the parade first arrive at the ConAgra parking. Buehrer said once they arrive, they are checked in and then assigned to a place in line. From the ConAgra lot, they travel to Walnut Street for the final staging.

“We’re going to try to be more organized at ConAgra”; hence, the need for additional volunteers.

Rain on Saturday, Nov. 15, resulted in the postponement of the Festival of Lights setup until Tuesday, Nov. 18.

Some volunteers went ahead and completed their tasks that day, and others have been working as time and weather allow.

She said the displays will be ready to go the night of the parade.