At left: Phillip Beans (44) powers his way to the basket for Ottawa Hills past Archbold’s Christian Goering (25). The Streaks held Beans, who is committed to playing at Holy Cross College, a Division I college, to 16 points, 6.1 under his season average of 22.1 points per game. At right: David Rupp (24) splits a pair of Green Bears and puts up a shot. Rupp led AHS with 10 points, but it wasn’t enough as Ottawa Hills won the Division III district semifinal 53-44.- photos by Scott Schultz

The Ottawa Hills Green Bears (20-2) were too much for Archbold (13-10) when the two clashed, Thursday, March 12, in the Division III district semifi nal at the Grand Canyon in Napoleon.

Behind the double-digit scoring of Eliot Browarsky and Phillip Beans, the Bears recorded a 53-44 victory. The win advanced them to the Saturday, March 14, district championship, where they lost to Tinora (20-3) 31-30.

The Rams defeated Genoa 52- 36 in their district semifinal.

“Archbold is a team that plays in your face and is a great shooting team. They know how to win,” said John Lindsay, OHHS head coach. “This was a big win for us.”

A tight first period had the Bears holding a 15-10 lead.

The two squads exchanged buckets to start the second period. Archbold knotted the score at 22 on a David Rupp jumper with 2:56 left in the half.

Rupp finished the game with eight points, while Christian Goering led the Streaks with three three-pointers for his total of nine. 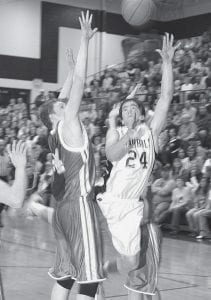 “We closed the gap and they responded. They answered our call,” said Doug Krauss, AHS head coach.

Beans, a 6-foot-8 senior who had been quiet the first eight minutes, started the Bears rolling, scoring six points at the charity stripe.

“Archbold did an outstanding job on Phil (Beans) all night long,” said Lindsay. “He missed his first shots early, but the third quarter we did a much better job getting him the ball.”

Kevin Nugent came up with a steal at mid-court and went the distance for two more, and Browarsky converted another Archbold turnover into points.

Browarsky added a free throw before the Streaks finally broke the scoring drought on a Garrett Morton deuce, ending the first half trailing 31-24.

Archbold tallied 10 points in the third period, but Beans made his presence known as the Bears worked the ball inside each trip down the court. Beans scored all 10 third-quarter points for the Bears, as they kept their seven-point lead to start the final eight minutes.

“We just didn’t have an answer consistently.

“Give credit to them. Beans is a player, and they got him the ball in the third quarter.”

Both squads went back and forth in the final period, with OH leading 48-42 with 1:38 left in the game.

To stop the clock the Streaks were forced to foul, sending the Bears to the charity stripe, where Browarsky went fourfor four in the closing minutes.

JJ Buckey, who added eight points in the game, also connected from the free-throw line as the Bears capped off their 20th win of the season.

“All in all, our guys gave us good effort all year,” said Krauss. “We were outmanned, but we came to play every night.

“We made strides this year. We gave it our best shot and let the chips fall, and tonight we weren’t good enough.”