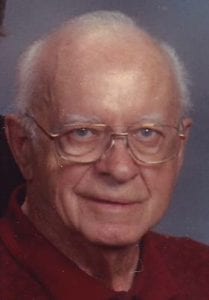 Orville Edwin Richer passed from this life in Mesa, Ariz., on April 15, 2008 at the age of 88.
The family will be present to greet guests at North Clinton Mennonite Church, 831 W. Linfoot St., Wauseon, Ohio on Saturday, April 19 from 10 a.m.-2 p.m.  A memorial service will be held at North Clinton on Sunday, April 20 at 3 p.m.
Orville was born in Wauseon on Dec. 26, 1919, the son of Samuel S. and Lucinda (Aeschliman) Richer. He graduated from Wauseon High School, and in 1941 married Velma Stuckey, who passed away in 1976. To this union five children were born.
He married Shirley Godwin Glasford in 1977.
Orville was a businessman in Wauseon for many years. Following Civilian Public Service during World War II, he opened a farm implement business on the corner of Fulton and Oak streets.  In that location he later became the Studebaker-Packard car dealer, after which he opened a Ford dealership there.
Orville also was proprietor for many years of Exit 3 Motel in Wauseon and Lincoln Lodge Motel near Lafayette, Ind.
In the mid-1960s, he began selling Honda motorcycles from his backyard on the corner of Clinton and Oak streets, and then opened Turnpike Travelers on Route 108, where he sold a variety of vehicles including Chrysler and Plymouth cars, Dodge trucks, Honda motorcycles, Cessna airplanes, motor homes, tent campers, mobile homes, John Deere lawn tractors, skidoos, and more.
Orville also gave opportunities to others by opening a Honda motorcycle and Nissan car business in Bowling Green and a Honda motorcycle business in Van Wert, which he then sold to the managers of those businesses.
Orville sold the Turnpike Traveler business in 1977 and moved to Arizona for the winter months.  He resided on the corner of Route 108 and County Road H when it was warm in Ohio, and enjoyed selling motor homes while working for his son, Joe.
Orville was an active member of North Clinton Mennonite Church from its beginning.
His family cherishes memories of his generosity, creativity, positive attitude, abiding faith and love. He was a salesman at heart and loved his work.
Orville is survived by his wife, Shirley, of Mesa, Ariz.; four children, Joe and his wife Susan of Toledo, Margaret and her husband Robert Smith of Iowa City, Iowa, Jim and his wife Brenda of Wauseon, and Ned and his wife Dorothy of St. Charles, Ill.; two stepchildren, Debbie Glasford of Mesa, Ariz., and Greg Glasford of Carbondale, Ill.; nine grandchildren; two great-grandchildren; two step-grandchildren; and one sister, Lucille Gerig of Archbold.
Orville was preceded in death by his parents, his first wife Velma, his son Gene, and his brother Harold.
Funeral arrangements have been entrusted to the Edgar-Grisier Funeral Home in Wauseon. Online condolences may be offered at www.GrisierFH.com.