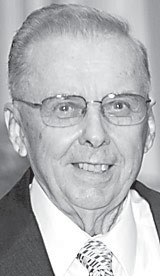 As a youth, Orval was baptized and was a longtime member of Central Mennonite Church, Archbold.

He was devoted to his family and retired after many years of service as a livestock buyer for Lugbill Livestock, Michigan Livestock Exchange, and most recently, United Producers.

Orval was very passionate about his work and his customers’ well-being.

Orval also enjoyed gatherings with immediate and extended family. He enjoyed playing games and having coffee with friends.

He was preceded in death by his parents and siblings Louis Jr., Edward, Dale, Freeman, and Earl Riegsecker; three sisters, Mildred and Florence Riegsecker, and Virgie (Stan) Aschliman.

The family recommends memorials be given to Kairos Prison Ministry or Mennonite Central Committee (MCC).

Services were held Saturday, April 16, 2016 at 4 p.m. at the Central Mennonite Church with David Elkins and Regina Wenger officiating. Interment preceded at 2:30 p.m. in the Pettisville Cemetery.

Short Funeral Home in Archbold was entrusted with the arrangements. www.ShortFune ralHome.com.