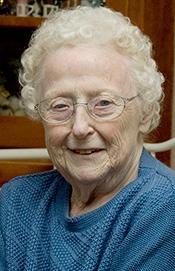 Opal M. Lauber, age 87, of Pettisville, passed away Monday, Jan. 28, 2013 at Fulton Manor in Wauseon.
Prior to her retirement, Opal had worked as a secretary for Toledo Edison in Wauseon, for many years.
Opal was born in Pettisville on Nov. 18, 1925, the daughter of Ammon and Erma (Buehrer) Lantz.
She was a member of St. John’s Christian Church in Archbold. She also volunteered for the Fulton County Red Cross for many years.
Surviving is one son, Stephen Lauber of Pettisville; granddaughter, Tessa Lauber of Pettisville; grandson, Seth Lauber of Dayton; great-granddaughter, Sadie Swisher; brother, Robert Lantz of Archbold; sister, Ruth Lantz of Pettisville.
She was preceded in death by her parents; five brothers, Wilbur, Emerson, Edwin, Eugene and Dale Lantz; and one sister, Marjorie Stickley.
The funeral service was held at 11 a.m., Thursday, at St. John’s Christian Church in Archbold, with Pastor Erich Christman, officiating. Interment was in the Pettisville Cemetery.
The family requests that memorial contributions be given to the Fulton County Red Cross or Fulton Manor.
Edgar-Grisier Funeral Home in Wauseon was entrusted with arrangements. www.GrisierFH.com.-Posted 1.31, 3 pm