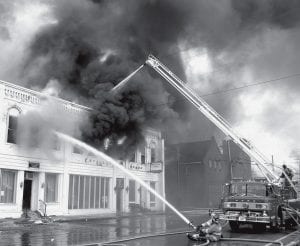 Fayette firefighters were among more than 20 Northwest Ohio departments called to Wauseon, Saturday morning, April 14, 2007, to battle a downtown fire. It destroyed half a block of downtown Wauseon. Fayette firefighters took up a position on West Elm Street, using a deluge gun and snorkel truck to fight the flames.- photo by David Pugh

About 300 firefighters and more than 20 fire departments, including Archbold, went to the county seat to battle a stubborn fire in downtown Wauseon’s oldest buildings.

It was the day when the work of an arsonist did around $5 million in damages. It wiped out a big part of a community. Its history and memories went up in roaring fire, intense heat, and smoke.

The fire started in the Doc Holliday’s restaurant. Before it was over, it worked its way north on Fulton Street, turned the corner and marched west, destroying buildings on the south side of West Elm Street.

No one knows who started the fire. The perpetrator remains at large; however, Marv Wheeler, Wauseon fire chief, said the search goes on.

“It’s still under investigation. There is stuff going on. It’s still being investigated,” he said.

One of the greatest impacts of the fire is its effect on the firefighting community.

“After the fact, a lot of communities stepped back and said, ‘this could happen here.’

“A lot of departments revamped and refreshed their pre-planning for downtown fires, because of the awareness in the back of their minds that this can happen,” he said. Any irate culprit could do the job.

“As a department, we discussed some of the buildings we have downtown.

“We revisited some of our pre-planning and talked about different scenarios that might come about,” Brodbeck said.

“It’s brought up and talked about in training sessions. We reemphasize that it could happen again,” Wheeler said.

“We look at other areas, talk about pre-planning, places to set up, attack methods,” he said.

There were lessons learned from the fire, he said.

But today, most are still operating in new locations, some- times in different forms.

A health food business is said to still be operating in a different form.

A storefront church continues to meet in another location.

Even while the fire was roaring, heavy equipment operators drove equipment into the smoking ruins to rip down what was left of the weakened and ravaged structures.

Within days, the rubble was gone, replaced by a gravel lot.

But plans call for new construction to emerge on the site of tragedy, as a group calling itself the Downtown Wauseon Development Corporation has plans to build a hotel, restaurant, and retail properties on the site of destruction.

Dehnbostel said a week doesn’t go by that he doesn’t get at least one question about the new project.

The fire hasn’t turned out to be a death blow to the Wauseon downtown, as many feared.

“I was confident it would not” spell the end of business in downtown Wauseon, he said.

He said new businesses are opening and others are relocating there.

“Part of that has been the merchants association,” Dehnbostel said.

“That’s why we remain optimistic,” he said.

“I will be anxiously looking for that first shovel of dirt to be turned” for the development corporation’s hotel-restaurant complex, he said.