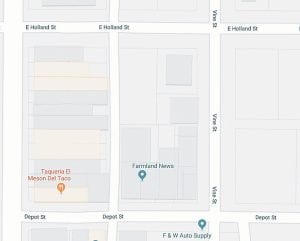 Signs marking Depot Street as a one-way street and a sidewalk on West Holland Street were topics at the Monday, April 15, meeting of Archbold Village Council.

Jordan Taylor, Archbold, approached council about a lack of signs designating Depot Street as open only to one-way (eastbound) traffic.

For example, he said, for traffic coming from a point south of Depot Street, north through the alley on the east side of North Defiance Street, there isn’t a sign saying “No Left Turn.”

He said his family can eat at the El Meson Del Taco restaurant and within 45 minutes, someone driving north through the alley will make a left, to go west on Depot Street.

Taylor said he spoke to two police officers whom he said had a “laissez-faire” attitude toward wrong-way violations on Depot Street.

“Laissez-faire” is a French term; it refers to a government economic policy of simply allowing things to progress with no government interference.

Donna Dettling, village administrator, said she would ask Leo Wixom III, police chief, Jason Martz, village superintendent of streets, and others to meet at Depot Street and look over the situation.

In a related matter, Kevin Morton, council president, asked why the 100 block of Vine Street is a one-way street.

Vehicles traveling south on Vine Street who wish to park in the village-owned parking lot at the northeast corner of Depot Street and Vine Street often turn right on East Holland Street, left on North Defiance Street, then left again onto Depot.

Jeff Fryman, mayor, said he has no idea why Vine Street was one-way, other than it always has been.

Vaughn Bentz, a councilman, asked about a sidewalk for the south side of West Holland Street, west of the middle school.

He noted there is a sidewalk on the north side of the street at Ruihley Park, but none on the south side.

Morton said youngsters walk down West Holland Street “like we did when we were kids.”

The next meeting is Monday, May 6, 6 pm, in council chambers.