One Injured In Plane Crash At Airport 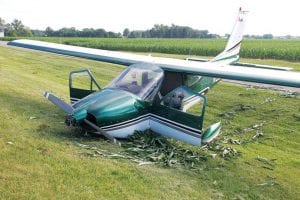 One man was still hospitalized on Monday after a plane crashed short of the runway at the Fulton County Airport, Wednesday, July 5. Preliminary information from the Federal Aviation Administration indicates the engine failed while the plane was on final approach.– photo by David Pugh

Roger Markey, age and address unknown, was listed in fair condition at the University of Toledo Medical Center after he was a passenger in a plane that crashed at the Fulton County Airport about 5:45 pm, Wednesday, July 5.

Preliminary information from the Ohio State Highway Patrol report on the mishap states Steven Schankin, age unavailable, was piloting the four-seat, single-engine aircraft with Allen Markey, 46, no address available, in the co-pilot seat.

R. Markey was in the back seat.

The report states the aircraft was on final approach for Runway 09 (landing to the east). Schankin reduced engine power as part of the approach procedure. When he did, the engine died.

The plane continued to glide towards the runway. It came down in a cornfield, a few hundred feet west of the end of Runway 09.

After the initial touchdown, the plane continued to the east, crossed Co. Rd. 14, then struck a ditch embankment on the east side of the road.

Schankin and A. Markey were unhurt. Wauseon Rescue transported R. Markey to UTMC.

The aircraft was a Cessna model 177, known as a Cardinal.

Cardinals were built from 1968-1978. They were equipped with engines ranging from 150 horsepower to as high as 200 hp. The wing is mounted atop the fuselage, making the airplane a “high-wing” design.

Tony Molinaro, spokesman for the Federal Aviation Administration, said one or two investigators were sent to Fulton County to talk to the pilot, examine the aircraft, and collect other information.

No further information will be released by the FAA until a final report is complete.