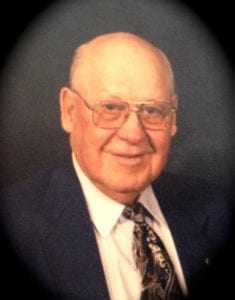 Olen V. Genter, age 92, of Pettisville, passed away Saturday morning, June 22, 2013, at Whitehouse Country Manor.
Prior to his retirement he had been a lifelong area farmer.
An Army Air Corp veteran of WWII, he had served in the Pacific Theater. Upon discharge from the service, he taught veterans agriculture for five years in Delta and Ridgeville Corners.
Olen was born in Ridgeville Twp., Henry County, Ohio, on June 8, 1921, the son of Aaron J. and Emma (Bruns) Genter.
On Dec. 26, 1948, he married Ada L. Weber, and she preceded him in death in 2005.
Originally a member of St. John Lutheran Church of rural Stryker, he transferred his membership to St. John U.C.C. in Archbold in 1948. In 2009 he transferred his membership back to St. John Lutheran Church of rural Stryker.
He was a member of the Ridgeville American Legion Post #454.
Olen was an active member and supporter of the Fulton County Farm Bureau and served the organization in many capacities, including membership chairman for many years.
Olen was an avid supporter of Pettisville School. He was often found at athletic events and also contributed in many ways to the FFA and Pettisville School Foundation.
Olen was inducted into the Fulton County Ag Hall of Fame in 2005.
Surviving are three daughters, Donna (Lee) Andre of Tecumseh, Mich., Diane (Roy) Colon of Pettisville, Marlene (Todd) Vogelsong of Holgate; one son, Dean (Kathy) Genter of Pettisville; 11 grandchildren; 19 great-grandchildren; and one sister, Janice Rohrs of Liberty Center.
He was preceded in death by his wife; his parents; an infant son, James Henry Genter; a granddaughter, Amber Danae Riegsecker; two brothers, Wilfred and Henry Genter; and an infant sister, Virginia.
Visitation will be held from 2 p.m. until 8 p.m. on Thursday, June 27, 2013, at St. John Lutheran Church, 23120 U.S. 6  Stryker, Ohio, where the funeral service will be held at 10 a.m. on Friday, June 28, 2013, with the Rev. Dale Kern, officiating. Interment will follow in the Pettisville Cemetery.
The family requests that memorial contributions be given to St. John Lutheran Church Bell Tower Fund or the charity of the donor’s choice.
Online condolences may be offered to the family at www.grisierfh.com.
Grisier Funeral Home in Archbold has been entrusted with arrangements.-Posted 6.23, 4 pm