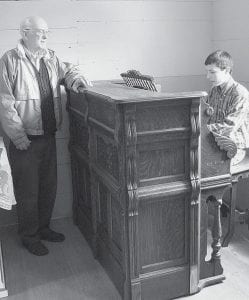 When an historic church organ fails, what would you do?

The two have worked together on such instruments for three years. They know a thing or two about restoring them.

The organ is a Williams Chapel Reed, made between 1897 and 1920. Past owners include St. Paul’s Lutheran Church in Pettisville, and Mrs. Jay Ziegler. It now resides in the old Lutheran Church at Sauder Village.

"It was very difficult and took a lot of energy to pedal," said Glasgow.

"We mostly replaced all the felt and cloth on the bellows, and leather gaskets," said Stiriz. "They get damaged and hard over time."

Glasgow took on the restoration project because he likes to see such old instruments work the way they were intended.

"They are part of our history and I’m fascinated by the technology."

One of the challenges was that somebody had worked on the bellows and put the staples really close together.

"Getting all of them out was the hardest part," said Stiriz.

After the restoration it was easier to pedal, and all the notes work. It also needed tuning.

Tuning is time consuming. It’s not the same as tuning a piano.

"You tune it to itself. You find out what pitch a note was originally, then tune all the notes to go with that," said Glasgow.

Glasgow and Stiriz came to know each other through Stiriz’s grandfather. Glasgow was looking for someone who wanted to work on organs, so he could pass along his knowledge of restoring them.

Glasgow enjoyed working with Stiriz, a junior historian at the village the past six years.

"We’ve restored instruments for a man in Texas, some that belonged to Jonah’s grandfather, and we’ve done a couple that Jonah has, himself."

"I consider him my mentor," said Stiriz.

"It’s nice to be able to work with someone who has a sense of humor. When you get discouraged, you can joke about things."

Glasgow said his role in teaching Stiriz is "not so much teaching, as it is just enjoying his company and working together."

The organ will be used all season at Sauder Village, "which is gratifying to know," said Glasgow.

Someone will play it every day for guests of the village, he said.