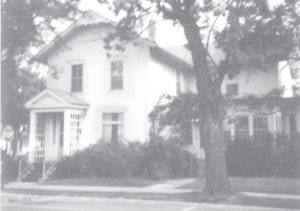 Frederick Stotzer, harness maker and first mayor of Archbold, built this house in the 1890s. Ora E. Lauber, owner of Lauber Clothing, lived in the house longer than anyone with his son’s family, William and Velma Lauber and their son Jack. The Farmers & Merchants State Bank bought the property at public auction in 1977, razed the house, and developed what is now known as the Village Green at the corner of West Holland and Ditto streets. Ora’s brother, Edward, lived next door to him on Ditto Street and another brother, Harry, lived at the southwest corner of West Holland and Ditto streets, today a public parking lot.– Antique photograph from the collection of Les Gericke