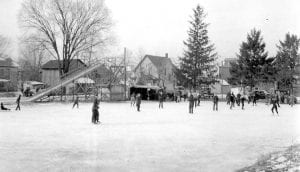 The ice skating pond at the southwest intersection of West and South streets was a popular winter place in the 1930s. A tall wood structure served as a slide for steel-runner sleds (above). It was little used because snow would not adhere to the wood, but it was fun during summer months for daring boys to ride a bicycle down the incline. A stone fireplace (at right) served as a warming cove for skaters; later, Park Board built an enclosed wood structure.– Antique photo from the collection of Liz Leupp 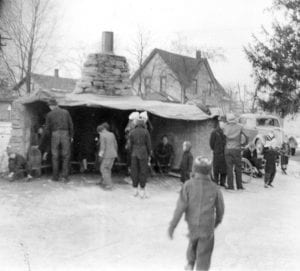