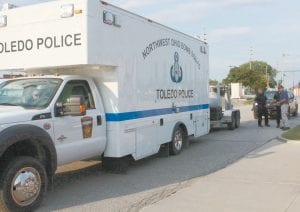 Archbold police officers talk with a member of the Toledo Police Bomb Squad in front of the Archbold Fire Department station, Monday evening, Aug. 14. The Bomb Squad was on its way to 405 Stryker Street, where a box of blasting caps was discovered.– photo by Mary Huber

The Toledo Police Bomb Squad made a visit to Archbold, Monday evening, Aug. 14, after a box of blasting caps, thought to be as many as 40 years old, was discovered.

Archbold police chief, said David Frey, current address unknown, discovered a box in the attic of his father’s garage at 405 Stryker Street. After hearing the nature of the discovery, Archbold firefighters called in Archbold police.

Wixom said when the situation was explained to him, he contacted the bomb squad.

“Toledo advised that they would come out and assist our office to determine what was in the box and make it safe,” Wixom said.

The bomb squad first stopped at the Archbold Fire Department for help in finding the 405 Stryker Street address. Its GPS, or global positioning system, had failed.

“They arrived and determined the box did indeed contain old blasting caps.

“They took what was found and advised it would be made safe,” Wixom said.