Ohio Turnpike Traffic On Decline Since 2006 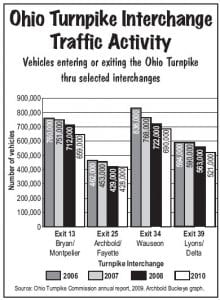 Traffic on the Ohio Turnpike and at the Archbold- Fayette interchange has been on the decline since 2006.

But toll revenues are up about 1.8% from 2006 to 2009, according to information from the Ohio Turnpike Commission.

The report states in 2009 about 48.2 million vehicles traveled all or part of the turnpike, down from just under 51.8 million in 2006, the peak year for turnpike traffic in the last 10 years. That represents a decline of almost 7% in the number of vehicles.

All of the area interchanges, Bryan-Montpelier, Archbold Fayette, Wauseon, and Delta-Lyons, were down in traffic. In each case, 2006 was the high.

For many years, Exit 218, the Niles-Youngstown interchange, has been the busiest on the Turnpike.

Turnpike commission offi cials attributed the decline in the total number of vehicles using the turnpike to the national economic slowdown.

“The total number of vehicles that traveled the Ohio Turnpike in 2009 declined 3.6%, and the vehicle miles traveled decline 3.2% from levels reached in 2008.

During 2009, the turnpike commission reported making about $51.6 million in capital improvements.

A man must have a certain amount of intelligent ignorance to get anywhere.– Charles F. Kettering

Beware of the half-truth. You may have gotten hold of the wrong half.–Seymour
Essrog