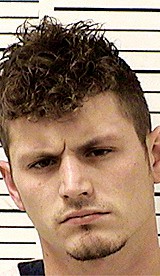 As of around noon yesterday, Tuesday, Noah Wade Pelmear, 27, Archbold, had been released from the Corrections Center of Northwest Ohio after the Ohio Supreme Court issued a stay of a judgment against him.

Heather Lumbrezer , clerk of the Western District Court, said earlier Tuesday morning, she was trying to contact Kent North, a visiting judge from Bryan, for instructions.

The issue was complicated because North’s office was closed Tuesday morning.

But a call to the offices of the Ohio Supreme Court advised Lumbrezer to have Pelmear released.

Pelmear appealed his convictions– on 2016 charge of driving while his license was suspended– on a number of legal points. (corrected 12.28.17, 5:14 pm)

The main point of appeal is that his father is a diplomat and minister of state of the Cherokee Nation of Indians.

A statement of facts submitted to the Supreme Court on behalf of N. Pelmear states diplomatic immunity covers him, as he is the “son and family member of Minister of State of the Cherokee Nation of Indians, Douglas- Alan Pelmear.”

In support of his argument before the Ohio Supreme Court, N. Pelmear states on May 27, 2016, he turned onto a street in Wauseon from a private driveway without using a turn signal.

A police officer observed the vehicle and performed a traffic stop. The traffic stop led to the driving while license suspended charge (corrected 12.28.17 5:14pm)

A second traffic stop on July 9, 2016, resulted in a charge of driving while license suspended against N. Pelmear.

N. Plemear states at that time of the traffic stop, he informed the arresting officer that he was a “Cherokee Nation of Indians foreign official family member of a diplomat.” (corrected 12.28.17 5:14pm)

He noted, “Fulton County Court does not have jurisdiction over alleged defendant Noah W. Pelmear, Cherokee Nation of Indians foreign official family member of a diplomat.”

Western District Court combined the two cases for the purpose of a bench trial. In a bench trial, there is no jury– the judge decides the case.

N. Pelmear was sentenced to 90 days in jail on each charge. All but 10 days were suspended.

An appeal was filed with the Sixth District Court of Appeals, assigning several points of error.

However, the appeals court decided against N. Pelmear on each point of his appeal.

He was ordered to begin serving his jail sentence as of Friday, Dec. 22, and was to pay fines at the rate of $25 per month beginning in February 2018.

An appeal of the appellant court decision was filed with the Ohio Supreme Court, Monday, Dec. 4.

Internet research into the Cherokee Nation of Indians reveals a page on Facebook.

An Aug. 9 post states, “Siyo ‘Greetings’ from Cherokee Country. After all of the years of research, and gathering of certified documents, we now have the evidence and know the reason why the Trail of Tears occurred.

“And since we have repatriated our historical Treaty Nation name, being “Cherokee Nation of Indians,” since no one was using it anymore, and have won many court cases using our Certified copy of our Treaty with the United States of America, which is still valid, we are now going to make a few corrections, and fully repatriate not only our Treaty Nation name, but our Country, and seek reparations for damages involving fraud, and genocide which there are no statues (sic) of limitations for, in order to set the record, and history books straight about what really happened involving the truth, and facts, as well as to bring our ancestors peace in resolving the matter, and a brighter future for our children and the many generations to come.”

There is at least one other group, Cherokee Nation, which uses the name “Cherokee” in the title.

It does not appear to be linked to the Cherokee Nation of Indians.