Ohio Flags Of Honor Visited By 800+ 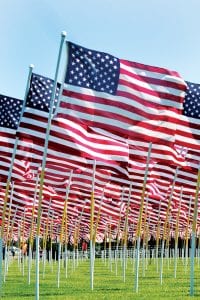 Several hundred American flags, part of the Flags of Honor memorial, stand at attention, Saturday afternoon, July 29. The memorial visited the Ridgeville American Legion Saturday and Sunday, July 29-30. The 294 flags within the memorial honor members of the United States Armed Forces who were killed in the global war on terror.– photo by David Pugh

A stiff breeze caused the several hundred flags in the Ohio Flags of Honor memorial to stand straight out Saturday afternoon, their whipping and snapping drowning all other sound.

People came in small groups– two here, five there. They would enter the field of flags– some wandering around, taking in the gravity of what the flags represent, others obviously looking for friends or loved ones.

Among the flags were 294 that were each adorned with the name of a man or woman– a member of the armed forces of the United States– who had died in the global war on terror. Most died in Iraq or Afghanistan.

It was the first visit for the memorial west of Interstate 75.

Steve Brunn, support coordinator for Survivor Outreach Services, an extension of the U.S. Army, said about 350 people attended a Saturday morning program in which the 294 flags were carried in and posted within the memorial, surrounded by other U.S. flags. 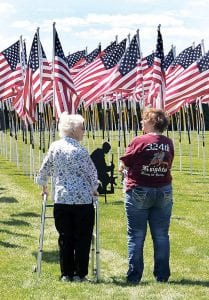 Loretta Cramer, Holgate, left, and her daughter, Marci Matthews, Defiance, stand in the Ohio Flags of Honor memorial, Saturday afternoon, July 29, at the Ridgeville American Legion. The family has a history of military service dating back to World War I, when Loretta’s father, William Fuhrhop, served in the cavalry.– photo by David Pugh

He estimated that from 10 am, Saturday, to 2 pm, Sunday, 800 to 1,000 people visited the memorial. The total includes those who attended the Saturday memorial service.

Loretta, more than 90 years old, pushed her walker up to a wreath placed by the family of Kevin “Sonny” Sonnenberg, from McClure, who died when his jet crashed in Iraq in 2007. They stood quietly for a few minutes.

Loretta said her family has a long record of military service.

She said her husband, John Cramer, spent his military career in Italy with the U.S. Army Air Corps during World War II.

Loretta’s father, William Fuhrhop, was in the cavalry during World War I.

“The only story he ever really told, he was riding, delivering somewhere to somewhere. They gave him a can of tomatoes for his meal, and he didn’t like tomatoes,” Loretta said.

“He carried that tomato can for a whole day and a half before he found someone who traded him carrots for his tomatoes.”

It was John who started a family tradition of family members serving in the Air Force.

Marci’s brother is a member of the Ohio Air National Guard 180th Fighter Wing, based at Toledo Express Airport.

Her son was a member.

A nephew was a member of the 180th, and later transferred to another unit.

(The United States Air Force, as its own branch of the military, wasn’t created until 1949.)

“He said the hardest thing he ever did… one time they brought an airplane back in and it was all banged up and shot up,” Loretta said.

“He had to go in because the regular crew wasn’t there, to bring the victims out.

“He had to bring out his best buddy, who had been shot. He said that was very hard.”

Loretta said John came back after 2 1/2 to three years in the service.

The sight of the memorial– the hundreds of flags rippling in the breeze– “would have made my dad cry,” Marci said.