Ohio Art Has Start In Archbold 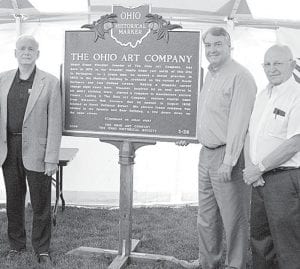 Historic Marker Debuts Prior to the opening of the Archbold Chautauqua series in 2009, an historical marker was dedicated, commemorating the founding of the Ohio Art Company in Archbold. The marker was placed near the village flag pole in the 100 block of North Defiance Street the following day. On hand for the dedication are, from left: Bill Killgallon, chief executive officer, Ohio Art; Larry Killgallon, Bill’s brother and company president; and Dale Taylor, company historian. The Killgallon brothers are owners of Ohio Art.– Editor’s note: Photo originally published July 29, 2009.

(Editors Note: The following article contains selections reprinted from the July 27, 1966, edition of the Archbold Buckeye.)

The Ohio Art Co., was started by Henry S. Winzeler, in the upstairs room over the Spoerle & Baer Saloon, 204 N. Defiance Street. The building was lost in the 1913 fire.

An item in the Archbold Buckeye, Oct. 6, 1908, said “H.S. Winzeler will embark in the novelty manufacturing business. He has rented part of the band hall and will give employment to 15 girls.”

October 16, 1908, the item also appeared: “Five girls and three men are now employed in H.S. Winzeler’s novelty factory. He has orders enough to keep 15 people busy for several months. He is engaged at present in the manufacture of framed pictures. The product is vey nice and would tempt anyone to buy.

The industry grew rapidly, and in 1910 occupied a large room in the Opera House block, the room where O.P. Kluepfel’s store now is and a new building constructed by Henry Hirsch, on a vacant lot where now is Scott Theatre.

(Editors note: Today, the front of the former Kluepfel store is occupied by the Locker Room. The Home Restaurant replaced the Scott Theatre.)

On Feb. 2, 1912, Henry S. Winzeler moved his growing industry to Bryan into a new building with 13, 500 square feet of floor space built by the Bryan Business Men’s Association.

Today, Ohio Art remains in Bryan. In a 2009 interview Bill Killgallon, then company chairman, said the company is “the finest metal litographer in America.”

At that time, about 200 were employed by the company, far less than more than 900 employees at its peak.