Ohio Art Got Its Start In Archbold 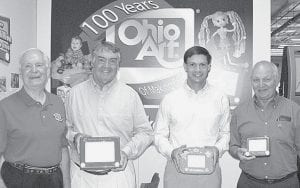 Ohio Art Company, founded in Archbold by Henry Winzeler in 1908, is now under the ownership of the Killgallon family. From left are Bill Killgallon, chairman of the board; his brother, Larry, president; and Larry’s son Martin, senior vice president and the third generation. Dale Taylor, far right, is the Ohio Art historian.

“We had a wonderful time,” Bill Killgallon, company chairman, said.

The company rented the Village and Founder’s Hall for the event.

The guest list included employees, retirees, and their families, for a total of about 350 people.

While the company has been an institution in Bryan for decades, the firm actually got its start in Archbold.

The company’s first products were metal picture frames, which sold well. Early photographs show boxes filled with the company products lining the streets of downtown Archbold, waiting to be shipped.

In about 1911, Killgallon said Winzeler was ready to expand his business, and went to the Farmers & Merchants Bank, in Archbold, for financing.

The story, confirmed by Killgallon through members of the Winzeler family, was that the F&M was willing to provide fi- nancing for Ohio Art, but in return, they wanted a piece of the business. 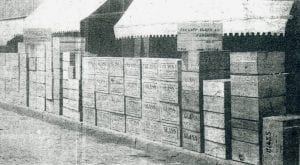 Ohio Art Company, founded in Archbold in 1908 by Henry Winzeler, grew by leaps and bounds. Its product was shipped from the Archbold rail depot throughout North America. Boxes of product were warehoused on both sides of the sidewalk in downtown Archbold until the horse-drawn wagon delivered them to the railroad depot for shipping. The founder’s father, who lived near Burlington, constructed many of the wood boxes.- courtesy photo

Some reports say the F&M demanded as much as a quarter share, but the figure has not been confirmed.

“Henry really was an entrepreneur. He didn’t want anyone owning any of his business.”

It’s not known whether someone from Bryan heard the story or Winzeler approached someone in Bryan, but Killgallon said the Bryan merchant’s association joined forces and raised the capital to loan Winzeler.

Winzeler repaid the businessmen within a year.

In fact, Killgallon said there were two or three loans of $100 to Winzeler; one of the $100 loans was from the F&M.

That original building, erected in about 1912, still exists at the corner of the railroad tracks and High Street in Bryan. The rest of the company has grown around it.

In the early 20th century, most toys were manufactured in Germany and imported.

When World War I broke out in 1914, German goods were embargoed.

Killgallon said Winzeler decided to get into the toy business and acquired a manufacturing plant in Erie, Pa., that made toys. The first Ohio Art toys were a windmill and a climbing monkey.

Since Winzeler had the metal working equipment, he later decided to make toys in Bryan. The first Bryan-made Ohio Art toy was a child’s tea set.

In the early 1920s, Winzeler realized picture frames needed to be decorated, and he purchased lithography equipment for printing on metal surfaces.

“We’re the finest metal lithographers in America,” he said.

The company imprints everything from lids for canning jars, to food containers, to the small metal tins for smokeless tobacco.

During the World War II years, toy production was shut down, as the company could not buy steel to make toys.

To keep Ohio Art workers on the job, the company turned to producing a variety of war materials, including metal gunsights.

In 1960, Ohio Art began manufacturing one of its signature products, the Etch-A-Sketch, at a factory in Hong Kong.

The Killgallons acquired control of the Ohio Art Corporation in late 1977 from the Winzelers.

In the early 1990s, Killgallon said the cost of manufacturing goods in America was very high compared to other parts of the world. As a result, all toy production was moved, first to Thailand, then to Hong Kong, and finally China.

The toy business has not done as well, but as a company, overall, Ohio Art remains in the black.

Long-range plans are to continue in the international marketing of toys.

The company is anticipating a good Christmas season.

“The toy business is a unique business. We have to be able to change, and know what the trends are. Frankly, we haven’t been too successful,” Killgallon said.

But there’s been a restructuring at Ohio Art. Killgallon said company officials believe the firm “is on a course that will make us successful in toys.”