OEPA Has Issues With Rover Pipeline 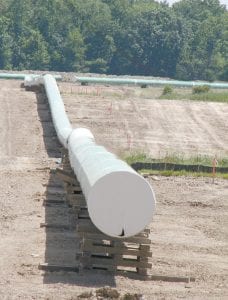 Pipeline Prepped A section of the Rover natural gas pipeline stretches into the distance in this photo, taken on Co. Rd. C, looking south. The pipeline sections are welded together; once a trench is excavated, specially-modified bulldozers lower the pipe into the trench. An informational graphic, describing the pipeline construction process, appears on www.ArchboldBuckeye.com.– photo by David Pugh

Work continues across northwest Ohio, including Fulton County, in connection with the construction of the Rover Pipeline project.

The $4.2-billion project calls for the construction of a natural gas pipeline, 42 inches (3 1/2 feet) in diameter in Fulton County.

It will extend from natural gas wells in West Virginia, Ohio, and Pennsylvania to a location north of Defiance, where two other large gas pipelines meet.

From there, the pipeline will extend into Michigan and eventually, Canada.

When completed, it will be capable of moving 3.25 billion cubic feet of natural gas per day.

But all is not smooth sailing for Rover.

The Ohio Environmental Protection Agency has cataloged a number of violations, including discharging “drilling mud” into the environment.

In a set of proposed administrative orders obtained from OEPA, there were seven discharges of drilling mud into the environment in Tuscarawas, Belmont, Stark, Richland, Harrison, and Wayne counties.

All are in a line, starting from Belmont County in southeastern Ohio on the West Virginia border, heading northwest.

“Drilling mud,” also known as “bentonite slurry,” is a mixture of bentonite clay and water.

Bentonite slurry is employed as a lubricant when crews use a process called horizontal directional drilling, or HDD.

Bentonite is a naturallyoccurring material. It is used in several applications, including in cat litter.

The releases ranged from 200 gallons of the material to the release of “several million” gallons of bentonite slurry into a designated wetland.

An OEPA estimate was 2.5 million gallons of slurry were discharged.

The proposed order states crews were using HDD equipment to bore under the Tuscarawas River. The slurry is supposed to return to the drilling rig.

In a letter from the Federal Energy Regulatory Commission (FERC), a FERC official said, “According to drilling logs, returns of drilling mud were absent or intermittent during the majority of the (drilling process.)

“This encompassed a period of nearly three weeks. During this period of absent (or intermittent) returns to the drilling rig, Rover continued to advance the drilling activities.

“Based on this information, as well as the volume, extent, and condition of drilling mud in the wetland, (FERC) staff has serious concerns regarding the magnitude of the incident (which was several orders of magnitude greater than other documented HDD inadvertent returns for this project), its environmental impacts, the lack of clarity regarding the underlying reasons for its occurrence, and the possibility of future problems.”

Then, on June 1, Cheryl A. LaFleur, acting FERC chairman, and Colette D. Honorable, a FERC member, said the FERC staff was informed by OEPA that diesel fuel had been detected in samples of the drilling mud found at the Tuscarawas River directional drilling site.

Rover had promised the drilling mud would only be composed of bentonite clay and water.

In their statement, LaFleur and Honorable said FERC staff will work “in close coordination with the Ohio EPA to identify and direct all necessary remediation to ensure that Rover minimizes, to the greatest extent possible, the environmental harm caused by the introduction of diesel fuel into the drilling mud.

“The letter also notes that (FERC) staff have referred the matter to the FERC Office of Enforcement for further investigation.

“Although we have no reason at this point to believe the release represents an imminent threat to human health or the environment, this incident raises concerns about potential long-term environmental impacts, including impacts on sensitive wetlands in Ohio.

“Moreover, the presence of diesel fuel in the drilling mud is inconsistent with the commitments made by Rover on which the Commission relied to certificate its project. We fully support the action of (FERC) staff to address and investigate these issues.”

OEPA officials ordered Rover to clean up the massive spill site, and because the bentonite slurry contains diesel fuel, they have been ordered to treat the material as industrial waste, and sample water quality in the area.

Rover came under fire in April and May after rains hit Ohio.

OEPA cited at least 14 incidents of water containing sediment being discharged into streams.

In some cases, crews set up “filter bags” to try and hold the sediment, to no avail.

There was also a complaint of trucks tracking mud from construction sites onto the road, and farmers complaining that Rover crews were pumping out trenches and discharging storm water into their fields.

In a statement, Alexis Daniel, a public relations and communications specialist for Energy Transfer Partners, parent company of Rover, said Rover officials understand “the concerns of Ohio farmers related to the issues caused by unprecedented recent rainfalls in the state.”

But in a statement, OEPA officials said, “Rainfall in Ohio this spring has not been unprecedented.”

The Archbold Buckeye has maintained weather data since 1987.

Over that 31-year period, the average rainfall for May, as recorded at the Archbold Wastewater Treatment Plant, has been 3.98 inches.

OEPA officials originally set an amount of $714,000 to be paid by Rover to cover claims and civil penalties concerning its actions.

After diesel fuel was discovered in the bentonite slurry, the proposed settlement is now $914,000.–corrected 6.21.17