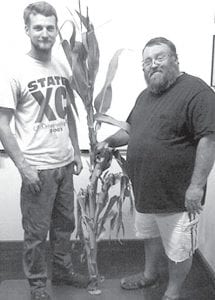 Whitney Stamm, left, and his father, Dale, with the six-eared corn stalk they found in one of their fields near West Unity. Whitney said generally, a corn plant will develop one or two ears, making this plant with six ears unique. Dale described the plant as a one-in-a-million mutation.– photo by David Pugh

Dale Stamm, rural West Unity, said he’s farmed on his own since 1967. He farmed with his father, Walter, before that, but he’d never seen a corn stalk with six ears.

But that’s exactly what he found on the edge of his field on Williams County Rd. G, just a mile past the Fulton County line, Wednesday, Aug. 1.

His son, Whitney, said in an average year, a corn plant will rarely produce more than one or two good ears of corn.

“Three is unusual,” he said.

Dale said the plant that produced all the “extra” ears wasn’t given any special treatment, or grown from special seed. It grew from a standard field corn variety.

Like many other fields in the area, Dale said the field that produced the unusual plant didn’t get significant rain until July 19.

However, he said he did apply liquid manure from his hog operation.

While the plant produced a lot of ears, they were small and produced very few kernels.

“It’s unique for a corn plant to shoot so many ears,” Dale said.

“You’ll get one mutant plant out of a million,” he said.