The Streaks, who are ranked fifth in Division III in the latest Ohio Soccer Scholastic Coaches Association poll, finish the league season at 5-0 with an outright championship after sharing the title with Bryan last season.

Archbold also defeated Continental 4-0 to run its record to 13-1-1 with one game remaining before tournament play begins.

The Streaks welcomed Liberty Center to Spengler Field for a game that decided the league champion. The Tigers (8-3) entered the contest with a 4-0 NWOAL record.

The crowd was loud and excited from the opening kick to the final whistle.

“You look at their record and you see how they’re playing, and we think they are a pretty good team,” said Sean Stewart, AHS head coach.

“It was going to be an intense game.” 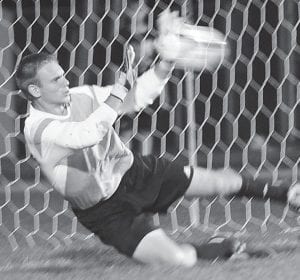 Archbold opened scoring in the first half when Kaiden Bedsole took a crossing pass from Trey Theobald and found the back of the net with 32:48 on the clock.

The rest of the half was controlled by the Tigers, who played inspired soccer throughout the game. The Streaks led 1-0 at the end of the half.

The Streaks eventually pulled away in the second half.

At the nine minute mark, Archbold was hit with a penalty inside of the goalie box, giving the Tigers a free kick.

Archbold keeper Caleb Wooley measured the free kick and made a diving stop to keep the Tigers from tying the game.

“He made a big play in a big moment, and you need those sometimes to get to what you wanna do,” said Stewart.

Josh Kidder finally gave Archbold some breathing room with a goal for a 2-0 lead with 23:49 to play.

Denver Beck all but slammed the door on a LC comeback with the third Blue Streak goal 3:49 later.

“I thought we hung in there well,” said Stewart.

“We absorbed some pressure and did a nice job of starting to control the second half.”

History was made with 18:07 to play when Bedsole scored his 58th career goal to become Archbold’s all-time leading scorer. He added his 59th goal with 16:54 left for the hat trick and the 5-0 win.

“His teammates did a great job of assisting him.

“Over the span of a career to get that many goals is quite an accomplishment.”

The Streaks scored four goals in the first half then cruised to get the 4-0 win.

Kidder netted two goals and an assist to lead the offense. Hogrefe and Connor Hagans scored the other two goals.