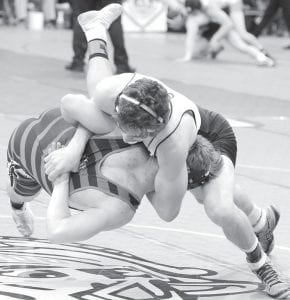 Kasyn Schaffner drives Cody Albaugh of Bellaire to his back to record the first-period fall in the first round of consolations.

In Division III, Delta led the way with three state placers, including the area’s only state champion, Zach Mattin (106 lbs.).

Cole Mattin was runner-up at 132 lbs.

Swanton scored 10 points and had one place finisher.

The Comets had six wrestlers compete and capture individual state championships, including Dylan D’Emilio, who won his fourth state title– the 32nd indi- vidual to accomplish the feat. 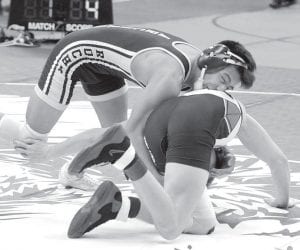 Zach Rocha scrambles to try to score the go-ahead points against Klay Reeves, a three-time state placer from Johnstown Northridge, in the sec- ond round of consolations. Rocha dropped a 3-1 overtime decision. 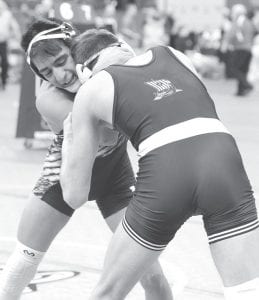 Zach Rocha fights for position against Rootstown’s Trent Duvall in the championship preliminaries. 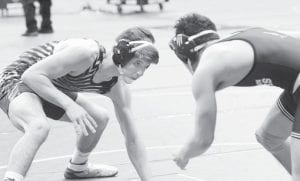 Brennan Short eyes Nico Chilson from Rootstown looking for an opening in their championship preliminary match. 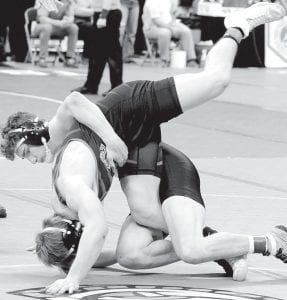 Kasyn Schaffner gets Cody Albaugh of Bellaire off-balance to score the first takedown of their first consolation round match. 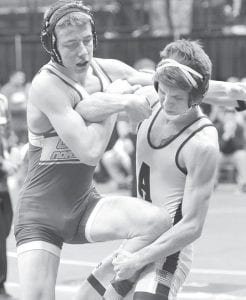 Brennan Short has a single leg on Sam Patterson of Batavia Clermont Northeast hoping to score points in their first consolation round.