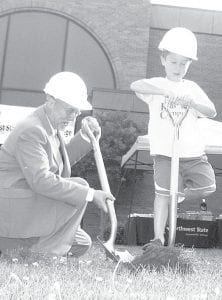 The move is a discriminatory practice, Wachtmann said, eliminating 85% of the companies and individuals capable of working on the project because they are not union members.

“It’s wrong to discriminate against the people who support and attended the college,” Wachtmann said.

She said because state money is being used to construct the building, the pay scale for workers on the project will be at union levels.

Yoder said the college does a lot of training for union apprenticeship programs; declaring the addition a union project shows that the college believes in the value of those training programs.

She said most of the union workers who will build the new 20,000-square-foot addition “live between here (NSCC’s rural Henry County campus) and Toledo.”

Watchmann said he wants NSCC officials “to come to their senses,” reject the unionized bids, then seek new bids without the union worker requirement in place.

Yoder said the NSCC board added additional work to the project, and “it’s not just a new building, it’s renovating the interior of a 40-year-old building, and that drives up costs. Plus we’re connecting two old buildings to a new building.”

That, she said, makes the project more expensive than simply constructing a new building on bare ground.

Wachtmann said that claim is false.

“Any general contractor will tell you that’s a farce,” he said.

Wachtmann said the facts prove that having a PLA in place will drive up the final cost of a typical project.

“Clearly, the unions signed the contract because they’re afraid to compete” with nonunion labor, he said.

“Northwest State, as great as they are, and as much as I love what they do– they’re driving up the cost per student,” by going with unionized workers, Wachtmann said.

“There’s no arguing the other side.”

He said over last weekend, he met with students from Henry County.

Northwest State lists its enrollment at just under 5,000.

The decision to use union workers “sends the wrong message” to companies in Northwest Ohio.

“This will have major negative ramifications. This gives the union both feet in the door to harass companies.

“This is unbelievably bad. It sends out a lot of bad vibes.”

He said a number of Northwest Ohio companies would close their doors rather than have unionized workers.

Watchmann said Stuckey told him the college runs training programs for the unions.

He said he asked Stuckey if he does anything the unions want; Stuckey said no.

Wachtmann said he asked Stuckey if he would begin leading gay rights parades, or performing abortions on campus– Stuckey said of course not.

“Then why are you doing this?” Wachtmann asked.

He said he has not been contacted by Stuckey, or any member of the NSCC board, after a third email.

Wachtmann said Ted Strickland (Ohio governor), “evil construction unions,” and those who control much of the money that flows through the state of Ohio, hate non-union workers, because non-union workers don’t pay dues to unions and therefore, don’t provide money the unions can donated to certain political candidates.

“No doubt, somewhere along the line, the college was under tremendous pressure to feed taxpayer money into the union hands,” he said.

Yoder said the PLA question “is not a Northwest State issue, it’s a political issue.”