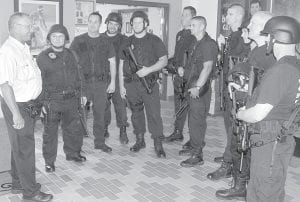 Al Word, left, chief of the Northwest State Community College police, talks with members of the Corrections Center of Northwest Ohio Special Response Team during drills conducted by the SRT at the college, Friday, July 26. Officials of the college and the regional jail facility have worked out an agreement allowing either to provide mutual aid to the other in the event of an emergency, such as an active shooter on the NSCC campus.– photo by David Pugh