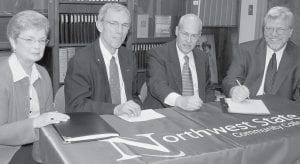 Teachers and other professional staff members represented by the Northwest State Community College Education Association will get base-pay raises totaling 10.85% over four years, plus a one-time cash payment of $1,250 in their new contract, signed Tuesday, Oct. 16.

Northwest State Community College is located south of Archbold near the junction of St. Rts. 66 and 34.

The two sides also agreed to a change in the insurance plan, which includes an increase in the employee contribution.

The insurance change “results in a considerable cost savings to the college,” the release stated.

“The Association membership is very pleased to have a contract settlement.

“The faculty and professional staff look forward to focusing their time and attention to serving NSCC students,” Steve Dick, co-president of the education association, said in the release.

“It is by working together as a team that we achieve our mission to serve, and I believe that we have a team of faculty and staff that can move this college forward,” Thomas Stuckey, NSCC president, said.