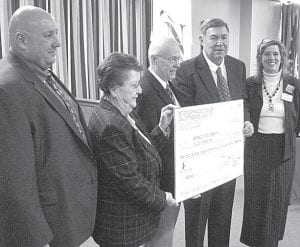 College officials and others gather with a replica of a check for nearly $3 million, representing the donation of the late Francis Fackler to the Northwest State Community College Foundation. Money will go for scholarships for Henry County students. From left: Peter Beck, NSCC Foundation chairman; Shirley Distel, a friend of Fackler; Thomas Stuckey, NSCC president; David Meekison, executor of the Fackler estate; and Robbin Wilcox, foundation development director.– photo by David Pugh

Francis Fackler, a Henry County native and Napoleon resident, was a member of what has been called America’s Greatest Generation.

Proving that greatness, Fackler’s will left almost $3 million to the Northwest State Community College Foundation, endowing a scholarship fund that will change the lives of about 300 Henry County residents every year.

Peter Beck, foundation chairman, said the money will be invested. Conservative estimates are the fund will generate about $125,000 a year.

Shirley Distal, a caregiver and close friend of Fackler, said he was born in Henry County. His family was poor, never owning their own home. They rented farms by working the land.

At five years of age, he opened a bank account, depositing money he earned picking strawberries. He worked with the Civilian Conservation Corps, and during World War II, joined the U.S. Navy Construction Battalion, or SeaBees.

After the war, he worked construction jobs and began buying real estate. After being injured on a job, he moved to North Carolina, where he learned investing.

He returned to Henry County, where he spent the remainder of his days.

His wife, Charlien Elvin, died in 1989. They had no children.

Stuckey said Fackler lived frugally, so he could pass on his bequest.

Beck said the foundation was in the midst of a $200,000 scholarship fund drive for students who otherwise could not afford to attend NSCC.

Fackler’s guidelines, as laid out in the will, call for the money to assist “academically deserving students with a financial need” from Henry County.

Stuckey said Fackler’s gift to NSCC does not benefit anyone outside Henry County.

Beck said he hopes Fackler’s gift will spur other donations, to benefit residents of other counties.–David
Pugh