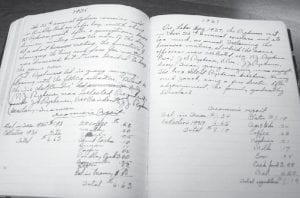 This notebook details the Rychener family reunions from 1918 through 1972. Most years’ reports are confined to one page, but some spill onto a second. A detailed accounting of expenses appears at the bottom of each page. In the photo, the book is open to the reports for the years 1936 and 1937. The book dutifully records every year, up until 1972.–photo by David Pugh

(Editor’s note: This is the first of two parts of excerpts taken from a record of Rychener family reunions. This week covers from the first reunion for which there was a record kept at the time, up to the 1940s. The next installment will cover the 1940s until the 62nd reunion, held in 1972.)

Many families have reunions, and some keep records.

But few have kept records as detailed as the descendents of Christian and John Lauber.

A leather-cover, seven-bynine inch notebook details the family’s reunions from 1918 through 1972.

Roseyn (Rychener) Delvin, of Kailua, Hawaii, the daughter of Earl and Helen (Frey) Rychener, Pettisville, was given the book by her sister, Marnetta White, Colorado Springs, Colo.

It was part of their father’s possessions. Earl died in 2002.

The book opens with the words “Rychener Family Secretary’s Report” written on the first inside page.

The first entry is on the “Sixth Annual Reunion.” The report states, “On Labor Day, September 1917 (indicating reunions started in 1911), the descendants of Christian and John Rychener, the only original persons of that family name known to have emigrated to this country, convened at the farm home of Christian J. Rychener, to celebrate the sixth annual reunion of the Rychener family.

“On this occasion, an effort was made to draw the family into a permanent organization, which should hold such a gathering every year for the furtherance of family pride and spirit.

“Following a stirring address by Rev. Henry Rychener and several short talks by others, such an organization was agreed upon.”

The record shows a freewill offering of $6.50 was collected. Expenses included $1 for food for “Children’s Home,” $1.50 in stamps, and 25 cents for the secretary’s book.

For several years, the reunion was held at the “Pettisville School Grounds.” In 1924, about 100 people attended.

The record shows the reunion moved to Archbold’s Ruihley Park in 1930, with about 125 in attendance. That year, there was a motion by J.J. Rychener, seconded by Henry Rychener, that $3 be paid to the park fund. The motion carried.