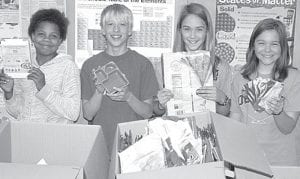 Eryka Wallace, Stuart Yoder, Amber Klopfenstein and Jaelyn Rufenacht, sixth graders at Pettisville, from left, display some items Maggie Enderle’s fifth- and sixth-grade classes are collecting as part of Terra Cycling, a program that turns things like empty food wrappers and cereal boxes into consumer products. The class receives two cents per wrapper, and has accumulated $90 so far. Enderle said the project demonstrates to students that with a little effort, waste can be kept out of landfills. The project has been ongoing for weeks, not just on Earth Day.–photo by David Pugh