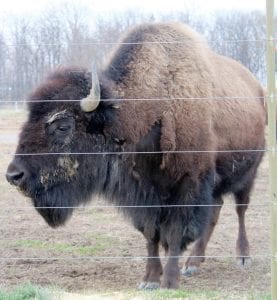 Above: A female bison looks out from between strands of an electric fence on property owned by Brent and Stacy Nofziger, rural Swanton. Brent, AHS ‘97, and his wife took delivery of 18 of the animals last month. The couple plans to offer bison meat, which is healthier than many other meats. Right: Brent and Stacy with their dog, Knox. In the background are some of the herd. Commonly called buffalo, Stacy said someone with a science degree said to call them bison.– photos by David Pugh

At one time, bison– or as they are more commonly called, buffalo– roamed free throughout the western United States.

Native Americans lived in a near-symbiotic relationship with the big animals, which provided them with food, clothing, and a variety of other things.

Then civilization came to America, and the bison, readily available and a good food source, were almost hunted out of existence.

Today, bison are coming back. Brent and Stacy Nofziger, rural Swanton, are a part of that movement.

In March, they took delivery of 18 bison– all girls, many soon to give birth.

“I read about it like eight years ago,” Brent said. “I saw an article or something, and I just started researching ‘raising bison.’

“I looked into it for a long time and then kind of let it die for a while, and then a year or so ago, Stacy said, ‘Let’s do it.’”

Brent, AHS ‘97, is the son of Paul and Esther, and grew up on a hog farm outside Archbold. 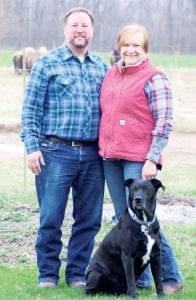 Stacy has a degree in zoology and completed a veterinary technician program.

Even with those experiences, the couple joined organizations like the National Bison Association, attended conferences, and developed relationships with other bison ranchers.

“We’ve got friends in Indiana who we call for advice. Whenever he and I can’t agree on something, we always say, ‘Let’s call Bud and see what he says,’ because Bud’s been doing it for 25 years,” Stacy said.

Turns out, there are a lot of good reasons.

Brent said bison meat is actually a health food. It’s lower in fat than even chicken and salmon.

Bison meat is low in calories, lower in cholesterol, and has as much or more protein as other meats.

And bison are low-maintenance animals. They won’t go into buildings, so they don’t need barns. They stay outside, rain or shine.

If a storm hits, Brent said they turn to face the oncoming wind.

In winter, their metabolism slows and they eat less.

When it comes time to give birth, they need no human assistance. They wander into a corner and have their calf.

Right now, Stacy is feeding their bison some corn to supplement grass. Once the calves are weaned, they will be on an all-grass diet.

Bison are not cattle, and many of their natural instincts have not been bred out of them.

They’re much more athletic than cattle. Brent said they can run as fast as 35 miles an hour and jump six feet. That’s why their corral is made with large, tall wooden posts with guardrails like you see along highways.

An electric fence keeps them in the pasture.

“As long as they’re fed and watered, they’re going to be happy,” Brent said.

It takes about 22 to 30 months for grass-fed bison to be ready for slaughter. The meat will be processed locally, then Brent plans to sell directly to the public.

When asked about possibly going to restaurants or grocery stores, Brent starts to answer, but Stacy simply says, “Stop.

“He always says no to this, but we have a… variable business plan. We’re going to go where the market is.

“Our intention is to do… freezer meat; you know, people stop out and pick up what they want.”

But they’re not ruling out restaurants, grocery stores, “even farmers markets,” she said.

“Potentially, one of my ideas for a building here on the property is to have a winter farmer’s market.”

So why are they called bison and not buffalo?

“Somebody with a science degree came along and said you had to call them bison,” Stacy said.