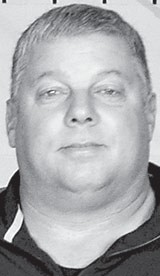 Editor’s Note: A version of this article was posted to www.ArchboldBuckeye.com at 12:40 pm, Friday, March 25.

Greg Nofziger, head coach of the Pettisville High School boys basketball program for the past 16 years, announced that he is stepping down, Friday, March 25.

Nofziger’s teams accumulated a 214-149 record over his career as head coach.

His teams won or shared the Buckeye Border Conference championship in 11 of his 16 years, including a run of eight consecutive league championships from 2003 to 2010.

A 1984 graduate, Nofziger was a member of the PHS district boys basketball championship team his senior year.

His coaching career at Pettisville started in 1987 at the eighth grade level. He has been a member of the staff ever since, having been a JV coach, varsity assistant, and head coach.

“We appreciate coach Nofziger’s many years of service to PHS and the boys basketball program. He has excelled as a player and as a coach,” said Steve Switzer, superintendent.

“It just seems like a few years ago that I remember watching him as eighth grade coach and thinking, ‘He could be a varsity coach someday.’

“I have been watching high school basketball for many years and have never seen a more determined, intense, and gutty player than Greg. If the ball was on the floor, he was there. If the ball went into the stands, well, fans had better watch out!

“He showed that same determination as a coach who amassed a probably-unprecedented 11 BBC championships in 16 years.”